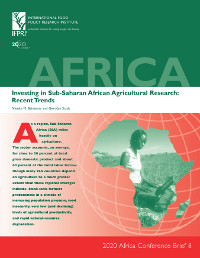 Agricultural research capacity is an important factor in building food security and economic stability in Africa. Furthermore, new and better-targeted technologies are essential to this process, and a well-developed and wellsupported agricultural research system is a prerequisite not only for the design of these technologies but also for their dissemination and adoption.

In 2000, R&D spending in SSA totaled nearly $1.5 billion (in 1993 international dollars), but funding has become increasingly scarce, irregular, and donor-dependent.These circumstances are often accompanied by poor national science and technology (S&T) policies and inefficient and ineffective agricultural research  management. Institutional reforms and sound S&T policies are needed to improve the efficiency and effectiveness of agricultural research in Africa.