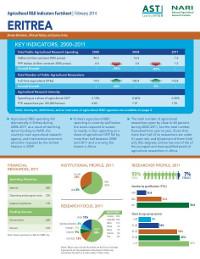 Agricultural R&D spending fell dramatically in Eritrea during 2008–2011 as a result of declining donor funding to NARI, the country’s main agricultural research agency, and international economic sanctions imposed by the United Nations in 2009.

Eritrea’s agricultural R&D spending is currently well below the levels required to sustain its needs; in fact, spending as a share of agricultural GDP fell by more than half between 2008 and 2011 and is among the lowest in Africa.