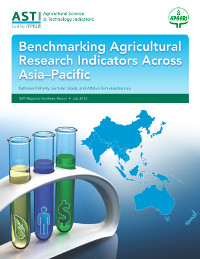 Aside from increased spending, most low- and middle-income countries in the region have also made considerable progress in building human resource capacity in agricultural R&D. With a few exceptions, the number of scientists employed in most countries across the region has increased, and in all the sample countries scientists’ qualification levels have improved since the 1990s. This development is notable given the widespread challenges that these agencies face, including attracting and maintaining a pool of well-qualified research staff, and dealing with disproportionate numbers of either aging, senior staff, or junior, inexperienced staff. Some countries with a history of political isolation (notably Cambodia, Lao PDR, and Vietnam) still have very low numbers of PhD-qualified staff, forming a significant impediment to advancing the quality of research. Nonetheless, these countries have wisely invested heavily in staff recruitment and training in recent years.

Despite these positive developments, agricultural R&D spending as a share of agricultural output in Asia–Pacific is lagging behind other regions of the developing world. In 2008, of the 13 low- and middle-income countries for which detailed spending data were available, Malaysia was the only country investing more than 1 percent of its agricultural GDP in agricultural research. China and India spent 0.50 and 0.40 percent, respectively, and levels in most other countries were lower still. Even though intensity ratios do not take into account the policy and institutional environment within which agricultural research takes place or the broader size and structure of a country’s agricultural sector and economy, these low ratios are a clear sign of underinvestment in agricultural R&D by many of the region’s low- and middle-income countries. If Asia–Pacific is to meet its agricultural, broader economic, and emerging challenges, including rapid population growth, climate change, environmental degradation, and food price volatility, levels of investment in agricultural R&D need to increase. In addition, such investments will need to be better managed, timed, and targeted to ensure maximum impact on productivity growth and poverty reduction. Increased diversification of funding sources will also be necessary. The private sector, for example, is still an untapped resource in many of the region’s countries. Supporting policy reforms offer further potential to ensure that the benefits of agricultural R&D translate into results.

Asia–Pacific countries are highly diverse, as reflected in their national agricultural research systems. Nevertheless, cross-country and regional linkages are another important strategy for leveraging limited resources and reducing wasteful duplication of R&D effort. To improve the relevance, effectiveness, and efficiency of research outputs, stronger linkages are also needed between the performers of agricultural research and its end users. It goes without saying that good governance is key to promoting the effectiveness and efficiency of research and ultimately to realizing the potential of agricultural innovation.