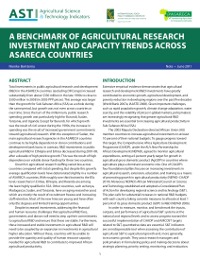 Since the turn of the millennium, total public agricultural R&D investments and capacities increased in most ASARECA countries. The growth in investments was largely the result of increased government commitments, although agricultural R&D continues to be highly dependent on donor funding and development bank loans. Furthermore, increased government contributions were most often directed toward salary increases and improvements to infrastructure and equipment. Despite the increases in overall numbers of agricultural researchers, average qualification levels in some countries deteriorated while other countries are facing an increasing aging researcher pool. The latter is often the result of recruitment freezes and increasing staff retention.

These four key areas will have to be addressed by government, donors, and other stakeholders will African agricultural R&D overcome the various investment and capacity challenges it faces.