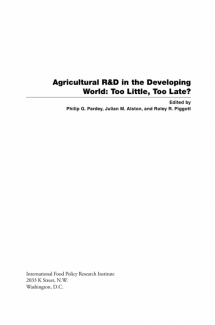 The balance of global agricultural research investments is shifting in ways that will have important long-term consequences, especially for the world’s poorest people.
The primary reason is changes in the supply and demand for agricultural technologies in the world’s richest countries, which have been the main producers of agricultural technologies. These countries will no longer provide the same levels of productivity-enhancing technologies, suitable for adaptation and adoption in food-deficit countries, as they did in the past. This trend has been compounded by a reduction of rich-country support for the international agricultural research system, which had already diverted its own attention away from productivity-enhancing technologies.

These changes mean that developing countries will have to become more selfreliant in the development of applicable agricultural technologies. To achieve complete
self-reliance will be beyond the ability of many countries, especially given recent and ongoing structural changes in science and scientific institutions—in particular the rise of modern biotechnologies and other high-tech agriculture, and the associated roles of intellectual property. The largest developing countries— Brazil, China, and India—are making the transition, but they have yet to overcome the problem of chronic underinvestment in agricultural research, and they have many problems to address with respect to the effective management and efficient use of available resources.

The poorest of the poor will continue to rely on the supply of spillovers from other countries and from multinational efforts, but current international investments in productivity-enhancing research seem too small to fill the vacuum being created by the changes in rich-country research agendas. During the twentieth century, the world’s poor countries were often slow to take advantage of the fruits of agricultural-science achievements in the rich countries; they began to adopt modern varieties and mechanical and chemical innovations, but only after a lag. One purpose of multinational initiatives was to shorten the lag and close the gap, and that goal was apparently being realized during the Green Revolution. But recent trends raise the specter of repeating the past: the return of a large and growing scientific and productivity gap, with attendant human problems. A rethinking of some national and multinational policies is required.

The issues are large-scale and long-term, and they demand serious attention, including further and more-specific analysis. Additional research policy analysis and evaluation will be required to support improved research policy formulation and priority setting. The benefits from effective policy research will come not only  from increasing the agricultural R&D effort and making it more economically efficient but also from remedying harmful policies. Many developing countries lack the  institutional capacity for social-science research oriented toward agricultural science and technology policy (Smith, Pardey, and Chan-Kang 2004). Like other types of agricultural R&D, policy-oriented research has to be locally adapted. A useful development in the case-study countries would be the establishment of domesticagricultural-research policy units to investigate and advise on a whole host of policy and practical issues concerning the NARSs, such as innovative funding methods,removal of constraints on private involvement in agricultural research, priority setting, workforce planning, incentive systems, and ex ante and ex post evaluation ofresearch projects.National governments in developing countries can also take some initiatives, as indicated by the analysis of case studies in this book, such as: (1) enhancing IPR and tailoring the institutional and policy details of IP to fit local circumstances; (2) increasing the total amount of government funding for their NARSs; (3) introducing institutional arrangements and incentives for private and joint public– private funding, such as matching grants and check-off funds; and (4) improving the processes by which agricultural research resources are administered and allocated. But such initiatives alone may not be sufficient. Another role for poor-country governments and others who care will be to remind rich people in developed countries that they can and should do more to help poor people in  developing countries to feed themselves.